Zante turtle island (real name Marathonisi) is so nicknamed due to its uncanny resemblance to a turtle; but…. that is not the only reason. Marathonisi is also the seasonal home and breeding grounds for the oceanic loggerhead sea turtle. The loggerhead turtle or Caretta Caretta as they are known come here to breed and lay their eggs every year. The Zante turtles are a huge attraction.

The waters surrounding Marathonisi make up the National Marine Park of Zakynthos which is part of the Natura 2000 ecological network.

The National Marine Park of Zakynthos was created in 1999 to protect the loggerhead turtles’ natural habitat and breeding grounds. Also living in the waters of the marine park is a population of endangered Mediterranean seals. The Monachus-Monachus seals around Zakynthos are one of just a few populations that can be found in the wild.

The Marine Park includes the Keri Lake and the two small islands of Strofadia (located 50 km from the island). In Laganas bay the park is split into three zones (A, B, C) and there are strict rules in place as to what you can and cannot do. For example, fishing is strictly prohibited inside each of the marine zones. This marine park also has limited recreational use and therefore no watersports are allowed. If you want to enjoy watersports, you will be able to do that at Alykes; Banana Beach; or another location where you are able to hire a range of boats or even go paragliding over the sea. 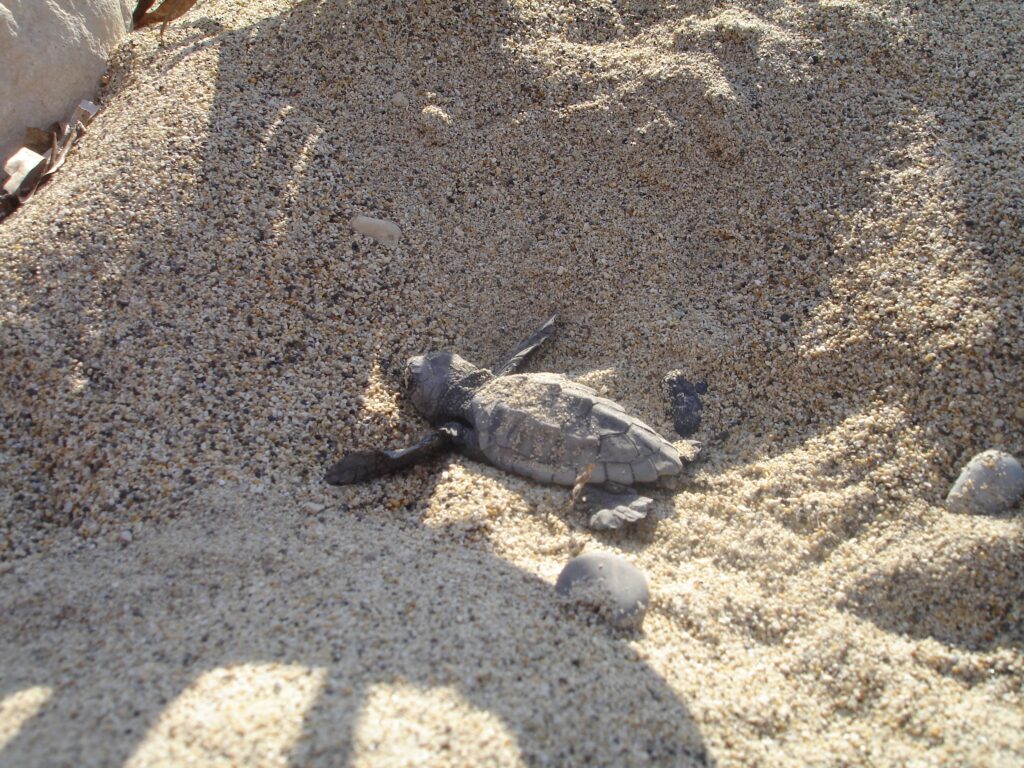 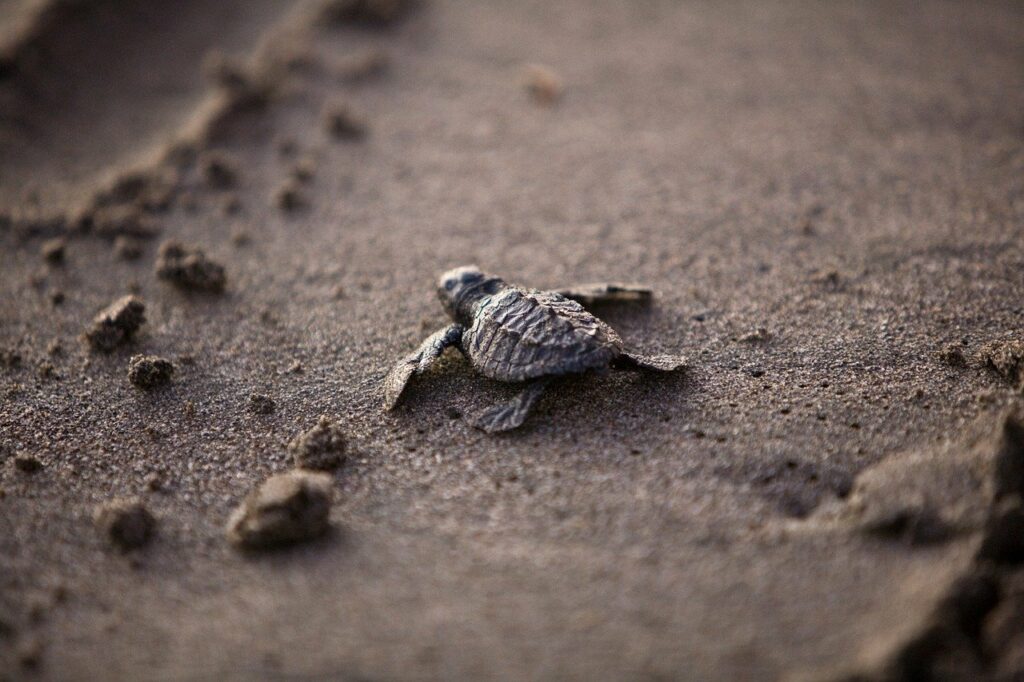 Turtle beach is the sandy beach located on Marathonisi (Turtle Island). This beach is one of the Marine Parks protected beaches because this is where the Caretta Caretta lay their eggs. Marathonisi is uninhabited by humans although visitors are allowed onto the beach during the day; but only the first few metres. There are many rules that one must adhere to when visiting Zante turtle beach. It is very important not to damage the Zante turtle’s habitat. When you go, please ensure that you respect the rules of the marine park and especially the rules on turtle beach. Mating season is from April – June and the babies hatch around 60 days later so if you go in the summer, you should get to see a turtle or 2.

The Zante turtles rely on us to protect their habitat. Please ensure you follow the rules! Also, please note that Turtle island is uninhabited so if you do go there, take your own food & drinks; just remember to take away your litter and dispose of it. 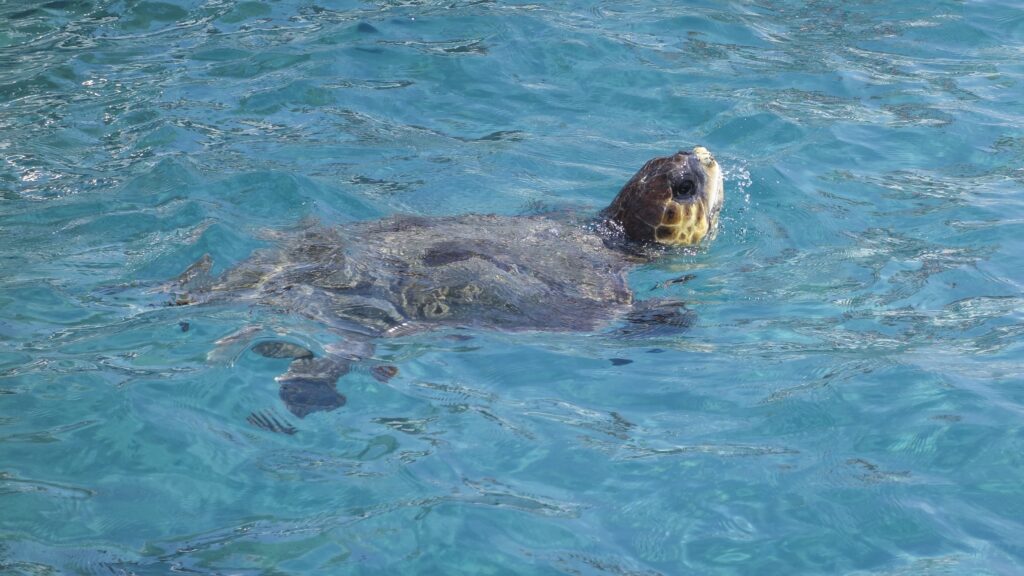 How to get to Turtle Island

There are vendors and hire merchants everywhere if you are confident enough to hire your own boat. You will be able to take a tour at your leisure and spend as long as you like out at the island. Just make sure that you abide by the rules! There are different rules on boats depending on what part of the bay you are in so make sure you do your homework.

2. Hire a Boat (With a Captain) - Recommended

This is our preferred choice. You still have the same freedom as hiring a boat and touring at your leisure. For a few extra Euro you can hire a local boat captain that knows the marine park rules and sails the bay every day.

Remember when hiring a boat whether with a captain or not, agree the price up front.

Many options are available and are always popular and recommended if you are staying quite some distance from Laganas bay. You will be able to organise the cruise excursion from a local vendor and then a coach will take you to the port and then back again at the end of the day. Depending on what cruise you choose, the larger boats will not actually stop at Turtle beach. The larger boats will often spend some time looking for turtles and then head out past Marathonisi towards the Keri caves and the beautiful ocean swimming stop.

As with most excursions, you will be able to book direct with your tour operator or you will be able to hire your own boat or go on an organised cruise. There are even glass bottom boats that will have a look around the bay for the turtles before heading to the island. The last trip I went on, we saw some turtles and went out past turtle island for a swim stop in the ocean.

I hope we have answered your question (Where is Turtle Island?). We definitely recommend this if you are looking for a day to remember. Seeing the Zante turtle in its own habitat is an incredible experience. Turtle island is certainly somewhere that you should visit and tick off the bucket list.

Conservation is important; so, when you go, please respect the volunteers and follow the rules.

If you have been before or are planning to go soon, let us know in the comments below. You can also see the beautiful sunset at Kampi.

We use cookies to ensure that we give you the best experience on our website. If you continue to use this site we will assume that you are happy with it.Ok